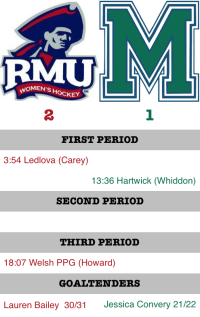 NEVILLE TWP. — Friday afternoon at 84 Lumber Arena, the Robert Morris women’s hockey team played its first College Hockey America conference game since the Colonials were eliminated from CHA Tournament by the Mercyhurst Lakers in the spring.
First on the docket for 2016-17? The same Lakers, who went on to win the conference title and an NCAA Tournament berth.

Robert Morris started out the new conference slate with a measure of revenge, as the Colonials got a late goal from Kirsten Welsh to beat Mercyhurst, 2-1.

Welsh took a feed from Brittany Howard and set her point shot sailing over the glove of Mercyhurst goaltender Jessica Convery.

The came just after the Lakers had killed a full, 2-minute 5-on-3, but the players that had come out of the penalty box weren’t yet in the play, giving Howard and Welsh room to operate just inside the blue line.

The Colonials knew the big power play opportunity with so little time remaining would be the key to the game. Score and win, fail, and the Lakers would have all the momentum going into overtime.

“Yes, absolutely,” Welsh said. “It was a lot of pressure, actually. We were on the bench talking and the clock was ticking. We were kind of looking at our teammates getting nervous. It was definitely a lot of pressure with a 5 on 3 when it’s a tie game for sure.”

The Colonials and Lakers played a physical battle, and the second period in particular was as parade to the penalty box. While the RMU goal came just after the power play had expired, their penalty kill unit was perfect on the afternoon, going 7-for-7. The big key for the unit was shot blocking and the play of goaltender Lauren Bailey. The team blocked 22 shots on the afternoon, with many of them coming on the penalty kill.

“Our team is phenomenal at blocking shots — our defenseman and our forwards — on the penalty,” Welsh said. “Maggie [LaGue] was saying she has welts all over her legs. Maeve [Garvey] has a broken finger. It’s just brutal. That’s what we do, though. We have to step up and try to get in the shooting lanes. We do it every practice and it’s showing on the ice and in the games.”

Bailey, who was outstanding in her own right, stopping 30 of 31, was complimentary of the work done in front of the crease defensively.

“My team is awesome with blocking shots,” she said. “I love that they sacrifice their bodies. They do it all the time.”

First-year forward Aneta Ledlova got the game off to a sweet start for RMU with her goal just 3:54 into the game. Ledlova, a native of Kadan, Czech Republic, is getting acclimated to the college game, and she’s been very close to scoring several times this year. Friday, she broke through with a power move to the front of the net and a nifty backhander past Convery.

“It was huge,” said head coach Paul Colontino. “She’s bene on the doorstep for the last four or five games, but for whatever reason that puck hasn’t dropped. She’s been working hard and pushing and pushing. To see her get one on her first shift of the game, to get in there, get things going and then get rewarded for it was huge. It gave the team some confidence right off the hop. If we can score in the first minute or two every time, I’ll take that.”

The Colonials have mostly been a one-line team, relying on the play of Howard, Jaycee Gebhard and Amber Rennie. Ledlova and the second unit coming alive could be a big deal as conference plays goes on.

“The first line has the most points, but it’s a team sport and every game is different,” Ledlova said. “Every game, someone plays better and someone plays worse. It’s good, it’s good. … I had lots of chances before, but now I hope to be better and better.”

The lone goal that Bailey allowed happened after a strange play. A whistle blew in the building, causing both teams to stop. But the whistle wasn’t blown by a referee, who told play to continue, and Brook Hartwick was able to cash in on a mad scramble in front of Bailey.

“I don’t really even know what happened,” Welsh said. “I was going to chip it off the glass and then there was this whistle. It wasn’t really loud enough to be a referee’s whistle but everyone stopped and were were looking around. … They were on it faster than we were. It was kind of a cheap goal, to be honest.”