Luke Edgerton is a player who was almost literally born to play hockey.

The 20-year old forward, born in Wheeling, West Virginia, has 11 points through 15 games this season with the New Jersey Hitmen and has accepted a scholarship to play for the Niagara Purple Eagles next season.

Edgerton grew up in a hockey family, with his dad, Devin Edgerton playing an 18-year professional hockey career. Traveling around Europe with his dad through his early childhood while his father played is what inspired Luke’s love for the game and is what guided him into being a Division I athlete.

“I was on skates when I was three years old,” Edgerton said. “I was born into hockey, from day one I fell in love. I was able to watch my dad play until I was 11 or 12 years old. He didn’t force me to play or anything I just always loved the game and always wanted to play.”

Edgerton established himself back in the United States after his father’s playing career ended, playing through his toddler ages to his early teens. He played on a variety of junior teams, including the Esmark Stars, Wilkes-Barre/Scranton Knights, Pittsburgh Penguins Elite and Amarillo Bulls before winding up in New Jersey, playing NCDC hockey for the Hitmen.

It was a connection that he established at one of these stops that wound up being the reason that Edgerton will be heading to Niagara. Edgerton’s head coach in Amarillo, Matt Nicholson, took a job to be an assistant coach at Niagara this year. Nicholson, a former Robert Morris assistant, had recruited Edgerton from the Penguins Elite team to Amarillo. With so much familiarity to Edgerton, Nicholson saw him as a great fit at Niagara, and a player that he wanted to continue coaching.

“When (Nicholson) took the job, he called me and asked me whether or not I would be interested. I obviously said yes, it’s a Division I school, it is a great opportunity,” said Edgerton. “From there, we kept in touch all summer, and when I came back to New Jersey for camp I went in for a visit. I liked the new head coach, I liked the school, I saw they were re-doing the rink. I liked it from there so they came to my first two games and after the second game they offered me a scholarship.” 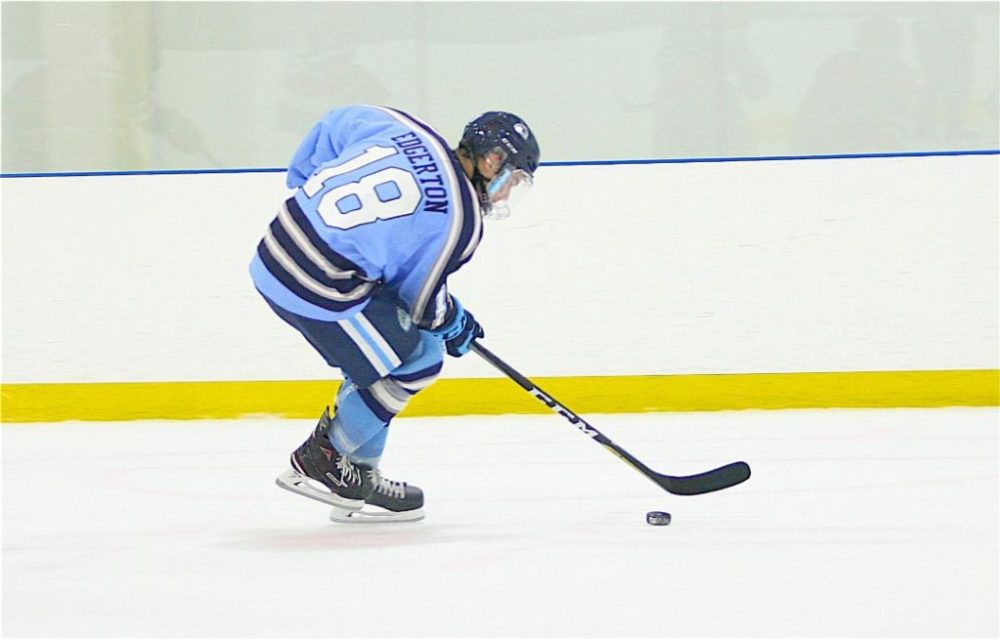 A week later, Edgerton was a Purple Eagle.

“[Head coach Jason] Lammers’ resume speaks for itself,” Edgerton said. “He has all of the connections in the world. They push you to play to better and to get to a pro level. That was a big selling point for me. When I met him, and saw his system and saw the team this year I feel like it fits my game well.”

Not only does Edgerton get the familiarity of playing under a previous coach, he also has a former teammate and friend who has followed Nicholson to Niagara already. Eric Cooley, who played with Edgerton not only in Amarillo but in Pittsburgh on the Penguins Elite team, is currently enrolled in his freshman year at Niagara. Edgerton has been in contact with Cooley, who has four points through six games at Niagara, and Cooley helped assure Edgerton of his decision.

While Edgerton has reached an impressive point in his playing career, he knows he has not scratched the surface for his talent yet. Edgerton has high aspirations, and is looking to come in and make an impact for Niagara as a freshman next season, similarly to Cooley.

“I just want to keep getting better this year so that next season I can go out and not only play every game but make a difference every game. Whatever it takes whether it is scoring more, being a playmaker or defensively, I am going to make sure I am able to do it.”

After a program-worst season in 2016-17, the new Niagara coaching staff is currently 4-2. With an influx of fresh faces and new talent coming such as Edgerton, Niagara could be a program that is worth following as they grow and establish an identity. Keep an eye on the Edgerton family, as well. Luke’s two younger brothers Cole and Chase are also active in the family business.