Lauren Bailey makes a save in the first period on Friday night. -- BRIAN MITCHELL

NEVILLE TWP., Pa. — A rare complete-game effort from the Colonials on a Friday night led Paul Colontino’s squad over the Penn State Nittany Lions 3-2 at the Island Sports Center. Until tonight, the squad surrendered six of the first nine opening contests to their opponents and tied two others.

The Colonials hosted Autism Awareness night, capped by a Teddy Bear toss that was to be triggered by the first goal of the evening.

The senior appeared to have tipped a Jaycee Gebhard shot in the first period that beat Nittany Lions starter Jennifer Brenneman. The goal at 8:30 led to an onslaught of stuffed animals propelled to the ice by the Colonials and Penn State faithful. 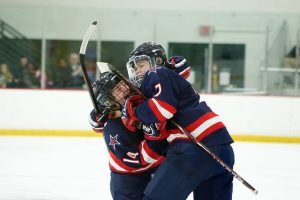 The fireworks continued in the second as first-year defender Wasyn Rice snuck a shot through Brenneman, collecting her first career goal. Natalie Heising registered her 10th goal of the season over three minutes later, converting a power play for the Lions and getting Penn State within one. Gebhard regained the two-goal Colonials advantage under 3 minutes later, shortly after Brenneman fell awkwardly backwards during a crease-crashing play, summoning the trainers for a couple of minutes.

The two teams exchanged chances throughout the third period, with neither able to capitalize until Abby Welch scored with less than a second left in regulation to cut the lead to two.

College Hockey America conference play began for the Colonials with road matches with Mercyhurst and RIT, and home stands against Lindenwood and the one game against Penn State in the books. With every point meaning so much in a small conference, the Colonials sit at 5-1-1, good enough for second and a single point out of the conference lead.

They also have a game in hand on current leader Mercyhurst, who are idle this weekend. A win tomorrow gives the Colonials a one-point lead in the same number of games – as well as a 5 point lead on third place Syracuse – the Colonials next conference opponent, well over a month away on January 19th at the Tennity Ice Skating Pavilion.

The top two teams receive a first-round bye in the CHA postseason, a welcome necessity as the tournament cuts the number of days off between the final game of the season to the first game of the postseason from six days to five, moving to Wednesday, Thursday and Friday.

The Colonials conclude the 2018 portion of their home schedule against Penn State at 5:05 p.m. on Saturday at the Island Sports Center. Awaiting Robert Morris will be another ranked opponent, No. 2 Minnesota on the road. The Colonials will return home Jan. 25-26, 2019 against RIT.