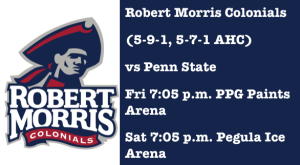 The recent bye week couldn’t have come at a better time for the Robert Morris Colonials. Coming on the heels of a frustrating sweep at the hands of the Bentley Falcons and before a gut-check type home-and-home series against non-conference rival Penn State, the Colonials will look to find more of a critical element that has been missing in their identity this season.

At several points during the season, the Colonials have had an opponent right where they wanted them, only to see the desired result get away from them. Part of that recipe has been a simple lack of awareness at critical times, and also a lack of a natural lerler instinct on other occasions.  The Colonials could have used some of both at Bentley two weeks ago.

“We need to make sure that we recognize the key points of the game,” Colonials head coach Derek Schooley said.  “We had a 3-2 lead with about 16 minutes left in the game, we lose a couple face offs and get pinned in our own end and we end up giving up the tying goal. Right now, we’ve got to find a way to fight through it and have a killer instinct and keep our foot on the gas. We need to not hope to win, but play to win.”

Schooley used the bye week to sort out some things that have been needing focus. His veteran team seemingly has all the tools necessary to complete a season to remember, but will need to work even harder and smarter to right the ship as the halfway point of the season approaches.

“It was a good time to have it, especially coming off two losses to re focus. We worked on our mental toughness, we worked on battling through some adversity and hopefully it’ll carry us forward in our final four games and lead us into playing the way we need to play in the second half of the year.”

The opponent this week has battled some early season adversity themselves as the Penn State Nittany Lions had been looking to find consistency in their game until recently.  Their recent six game point streak has enabled them to achieve a #18 national ranking as they enter the weekend, and they should be brimming with confidence. However, the Colonials series advantage with Penn State and their success against ranked teams over the years has been well documented, and they will not be intimidated on either home rink this weekend. A recipe for success that starts, with a good start.

“We’ve had very good starts against them. It’s always challenging coming off a bye week to get back into it, especially playing a very strong Penn State team that is unbeaten in their last six games. We have to make sure that we have a strong start and we can’t change the game. We’ve got to be ready to go and be ready to play right off the bat and we can’t afford to chase the scoreboard the whole game. It’s a key for us. When we’ve had good starts, we’ve had a tremendous amount of success, and we haven’t done a good job of chasing the game.”

With a veteran group at his disposal, one that has had its fair share of success at PPG Paints Arena over the years, Schooley knows that his team will not be awestruck with the big stage his team will be playing on and seems more concerned with his experience players playing to their full potential once the puck drops.

“We’ve won the last two Three Rivers Classic tournaments with this senior group. Quite honestly, you rely off experience, but experience is only as good as your performance and we’ve got to be sure that we’re ready to go and play a complete hockey game. We need to make sure we play for 60 minutes and compete as hard as we have been in practice, in the game.”

Risling Could Be Difference Maker

One player to watch could very well by freshman Ryley Risling, who managed his second goal in his first five games last weekend and has had a strong net front presence in the early part of his Robert Morris career. If he can make his practice effort match that which he’s put forth in his games, he could represent a part of the puzzle to making the Colonials a deeper scoring team.

“Ryley’s an interesting one,” Schooley said. “His habits in practice need to improve. Four of his first five games have been very good, but when you practice more than you play games, practice is important. Almost all the time, your practice habits transfer over to your game. It’s interesting, but for Ryley to be a consistent player in the line up on a game by game basis, his practice habits need to improve.  You can’t just show up on Friday or Saturday and expect to happen because in the long run that’s not a recipe for success. But that being said, Ryley has been very good in the games. He scores goals from in front of the net, he plays with energy and enthusiasm.

The home teams hold serve all weekend as the Colonials come out with an inspired effort after the rust comes off on Friday night at PPG Paints Arena to take a 4-2 win. While on Saturday, the Lions hold off a late really for a 5-4 win.