The first computer-based ACHA rankings were released Friday and, for the first time in recent memory, the College Hockey Mid-America conference has multiple teams in the top 25. The Pittsburgh Panthers (9-1) move up one spot to No. 24 and the Robert Morris Colonials (9-2-1) join the rankings at No. 21. Prior to this week, the rankings were a coaches poll for the first month of the season. Pittsburgh was ranked No. 25 during last week’s coaches poll.

The top 20 ranked teams at the conclusion of the season, including any unranked conference champions, are invited to participate in the ACHA National Tournament to be held in Frisco, Texas in March. Robert Morris won the CHMA Championship last season but was not ranked, which means that they replaced the lowest ranked team to earn the automatic bid to the tournament.

Pittsburgh’s remaining non-conference slate includes upcoming games on Nov. 1 and 2 against Rhode Island, who was dropped from the rankings this week, as well as a two game series against No. 13 Ohio to end the season on Feb. 21 and 22. 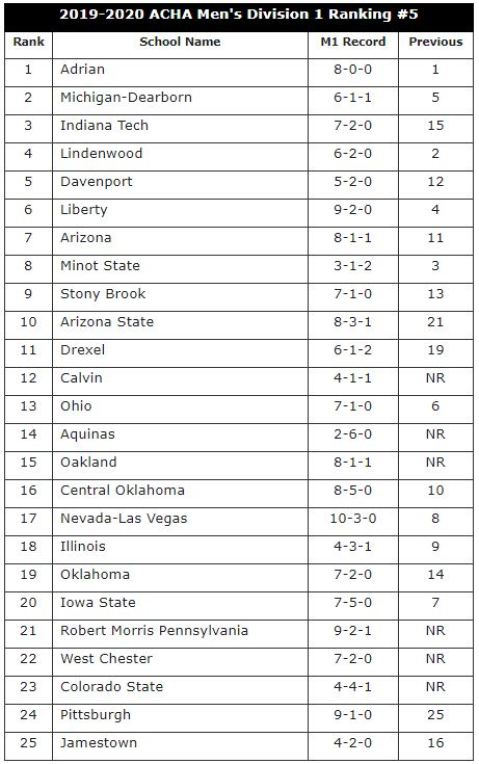 The sixth ranking of the regular season will be released on Wednesday, Nov. 6, 2019.