Brady Ferguson lines up for a face-off in the first period against Ohio State. -- ALAN SAUNDERS

For the fourth time in program history and the second time in as many years, the Colonials visited a top-15 team and came away with an upset victory on the road, this time dismantling the No. 11 Ohio State Buckeyes, 6-2, at Value City Arena.

The Colonials went 3-1 against ranked opponents in 2015-16, splitting a weekend series at then-No. 10 Michigan and knocking off Penn State and UMass-Lowell in the Three Rivers Classic tournament at Consol Energy Center.

So when the Colonials took the three-hour bus ride to Columbus for Friday’s matchup with the Buckeyes, it wasn’t exactly a David versus Goliath scenario in their minds, but there was a hurdle that would need to be overcome: the history of success against ranked opponents wasn’t shared by the team’s 10 freshman, six of whom were in the starting lineup.

The message must have gotten across. From the opening face-off, the Colonials were the better team. A casual observer would have had a hard time deciphering which team was unbeaten and which was fighting to even its record at .500.

“We’ve got a lot of young freshmen that are being ingrained into our culture,” he added. “You don’t want them to be overwhelmed by the situation. Our older guys did a great job of telling them, ‘This is how we play against these guys.’”

Leading that drive was senior defenseman John Rey. Rey, always a vocal player, stepped up with a goal and an assist while leading the second power play unit to a 2-for-2 night.

“We’re a young team, but we really can’t be in awe of the Big Ten Conference and the upper-echelon opponents, so to speak,” Rey said. “We’re just as good as anyone in this country. After that first period, the nerves got out of the way and we just played Colonials hockey and showed what we can do.”

The first period involved a shaky start from freshman goaltender Francis Marotte, who let in a soft goal just 3:14 into the game. But Marotte buckled down and was outstanding down the stretch.

“It’s special,” Marotte said. “Obviously, I’ve had couple wins. This one is more special. You’re not expected to win that game. We showed them that we could play with them and even more than that. It felt great, for sure.”

The Colonials’ top unit of Alex Tonge, Daniel Leavens and Brady Ferguson scored three goals — all at even strength — with Tonge contributing a pair and the game-winner and Ferguson cashing in with a pretty backhander for a crucial insurance goal late.

But it wasn’t just the goal scoring that separated them. They were the best line on the ice for either team, and consistently outworked the Buckeyes below the goal line and on the boards, which led to extended shifts in the offensive zone.

“I thought we were pretty good down low,” Schooley said. “I thought we did a good job of playing in their end. When we advanced some pucks, we had some really good shifts.”

“Our line definitely had a lot of success down low,” said Tonge, whose first goal came on a pass from behind the net by defenseman Eric Israel. “I think I have to give credit to both of my line mates there, they were easy to play with.”

That Tonge goal wasn’t just big for the line, it was big for the team’s psyche, as well. After outplaying Ohio State for much of the opening period, the Colonials were trailing, 1-0. Instead, they went into the break tied thanks to Tonge’s tally.

“Tonge had a good year last year,” Rey said. “I think he goes under the radar. He [didn’t have any goals] but he had 12 points. This year, he’s really stepped it up.”

Tonge now has six goals in seven games to start his sophomore season and has been a big part of the success of the top unit. 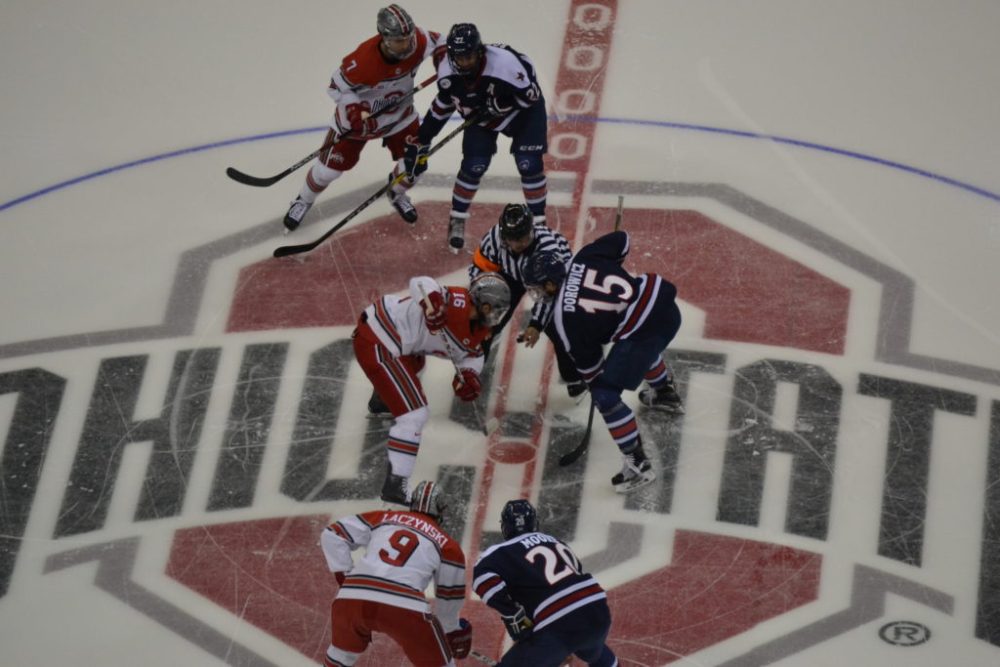 Spencer Dorowicz lines up for the opening face-off against Ohio State. — ALAN SAUNDERS

The Colonials’ power play unit continues to be red-hot, and Spencer Dorowicz was a big part of the success on Friday. He scored a goal in the second period and added a pair of assists to tie a career high with three points.

It’s been a long journey over a short period of time for Dorowicz, who started his junior year inauspiciously. He was held scoreless over his first three games and found himself watching from the stands for the team’s fourth contest as a healthy scratch.

“It’s funny. I worked as hard as I ever did this summer,” Dorowicz said. “I came in maybe expecting a lot of things and it was a tough start for me. A bit of a wakeup call a couple weekends ago. It was probably the best thing for me. I’ve just been working as hard as I can to get better every day. There’s still plenty to work on, but tonight, I got rewarded and it felt pretty good.”

Spencer wasn’t the only Dorowicz completing a long journey. A native of Olds, Alberta, Dorowicz doesn’t get a lot of visits from his family during the season, but his parents and other family members made the 3,000-plus mile trip from north of Calgary to Pittsburgh and then out to Columbus for the game.

“That’s pretty special,” Dorowicz said. “If there’s a time to get a goal, it’s when your parents are in the crowd. I’m definitely happy to get one for them and happy to have them here.”

With the Colonials’ big win, it’s safe to say the freshman have been indoctrinated the locker room’s upset culture, but Schooley said his team was more subdued than when they beat then-No. 1 Miami in 2010 or Michigan a year ago. It’s become something that Robert Morris does, especially at Ohio State, where they are now 4-1.

“I think that tells us a lot about our character [to come from behind,]” Tonge said. “The bench stayed positive. We got a couple goals in the second period there to give us the lead. We just held on in the end there.”

“We came in 3-1 and our goal was to make it 4-1,” Marotte added. “It’s big because we had six freshmen in the lineup. Coach said pretty much not to be impressed — just play hard and have fun. You never know what we can happen. We played way harder than they did. You saw what we did. I think we can beat them tomorrow in our barn.”

The Buckeyes will get a chance for revenge Saturday at 84 Lumber Arena. That game has a 7:05 p.m faceoff.