NEVILLE TWP., PA– It might not have been the prettiest game the Colonials have played this season, but it was a solid 60 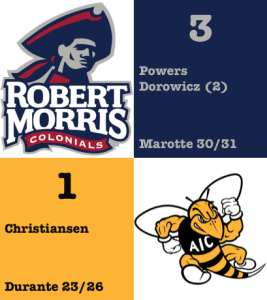 minute effort in their 3-1 victory over the AIC Yellow Jackets on Friday night.

Anchored by two goals from Spencer Dorowicz, a 30 save performance from goaltender Francis Marotte (including two key toe saves in the third period), as well as a power play that managed two goals on four chances, the Colonials earned their fourth win on the season and two very important conference points.

“We had a great start,” head coach Derek Schooley said.  “I don’t think we gave up much right off the bat and we did a good job of playing in their end and getting the first one obviously was a big one for us, it gave us a lead that we never relinquished. I liked our second period and our third period wasn’t pretty, but it was effective. We managed around the net very well, we didn’t get beat off the wall and we did a good job gaining zones.”

Beyond the goals and the solid goaltending, the Colonials played a strong defensive game, clogging passing lanes and blocking shots throughout the contest, managing the momentum following their goals- something that had plagued them in the previous weekend against RIT.

“We wanted to make sure we were focusing on the little things, having sticks in the right lanes and for the most part we did a good job of that and got a key penalty kill and Frankie was great in net,” Dorowicz said. “I’m playing with some awesome players and you’re going to get good chances. I’m just trying to get it on the net and they’re going in.”

An unlikely candidate struck first for Robert Morris as senior defenseman Robert Powers opened the scoring on a first period power play. It was his first career goal and was evidence of the type of defenseman he can be when called upon with more opportunities on the man-advantage.

“I’ve always tried to be a little more of an offensive defenseman and to be able to use those kinds of skills has been nice,” Powers said. “I’m just trying to get back to playing how I play and doing what I do that makes me successful. I’ve worked a lot with our defensive coach Mike Gershon and he’s helped me a lot to hone my skills and kind of boosts my confidence to help me do what I can do out there.”

Dorowicz put the Colonials ahead by two on a goal from Luke Lynch and Powers. The goal earned him ten points on the season and extended his current scoring streak to five games.

“We got two goals from our second unit and slowly but surely our second unit is becoming our first unit,” Schooley said. “They got a goal in the last game against RIT and you ride the hot hand sometimes. They did a very good job of puck movement, took the puck hard to the net off a rush and did a very good job moving the puck from low to high and side to side quickly which created the second goal.”

JACKETS WILL BE READY

In the loss, the Yellow Jackets managed to out shoot the Colonials by a 31-26 margin and looked every bit an improved hockey team. AIC managed to keep the outcome in question in the third period as Blake Christiansen converted a wrap-around early in the third period. Had it not been for Marotte’s timely saves and a good penalty killing effort on the final AIC power play of the evening, the game could have turned in another direction. To earn the weekend sweep, the Colonials will have to be prepared to face an even stronger effort from their opponent.

Although the 2017-18 season had began with unfortunate bounces and other factors that led to a less than desired start, the Colonials were rewarded for their effort on Friday night.  Outside of a couple flurries of activity during the third period, they kept the Yellow Jackets off the board while giving little in the way of good looks to AIC. For one night, it was a relief to finally get the deserved result.

“It’s been a weird year. So far our effort’s been there, we’ve done some really good things,” Powers said. “It’s not for lack of trying or anything like that. But to put together a really solid win and a full 60 minutes is really good for us. It’s big for us to get momentum and confidence. It’s been disheartening that we’ve had so much effort and been trying so hard and it just hasn’t gone our way so if anything it’s a big boost for us going in to tomorrow night.”