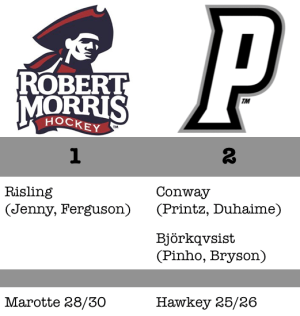 PITTSBURGH — The Providence Friars, behind a strong performance from goaltender Hayden Hawkey and a defensive effort that kept the Robert Morris offense in check, etched their name into the Three Rivers Classic record books and onto the Confluence Cup with a 2-1 victory at PPG Paints Arena on Saturday night.

The Friars dominated the early portion of the game in terms of both shots and territory, yet came away with only a one goal lead after one period. Meanwhile, the Colonials turned the momentum and territory advantage, but were not able to sustain pressure or generate enough prime scoring chances to win their third Confluence Cup.

Scott Conway got the Friars off and running when he put a rebound of a Greg Fritz shot past Robert Morris goaltender Francis Marotte at the 13:23 mark, breaking open a scoreless first period. The Friars out shot Robert Morris by a 18-6 margin in the first 20 minutes as Marotte made several key saves to keep the Colonials within reach.

“Frustrating,” Colonial head coach Derek Schooley said. “That was a very good hockey team we just played. But for 40 minutes I felt that we were just as good or even better. They were outstanding in the first period and put us back on our heels and then it was a pretty even hockey game after that.”

Click for more coverage of the 2017 Three Rivers Classic.

The teams found themselves in a nip and tuck game though forty minutes of hockey as Ryley Risling’s goal from the slot tied the score at one at 3:52 of the second period. Providence managed to take the lead with just over two minutes to go in the second courtesy of Pittsburgh Penguins prospect Kaspar Björkvist, who put a rebound past Marotte on the second Providence power play of the evening to put the Friars out front going into the locker room before the final frame.

The Colonials had good chances to take the lead themselves in the second frame with three consecutive power plays but managed just seven shots total and failed to capitalize with the man advantage despite several near misses.  The Friars’ penalty kill, which came into the game ranked fifth in the nation with a 87.5% success rate, lived up to it’s ranking and was aided by a few key saves from Hawkey and a crossbar that stopped two Colonial shot attempts with the man advantage.. The Friars finished the evening six-for-six on the penalty kill.

“That’s a really good team,” Colonial forward Brady Ferguson said. “But I think we were right there with them for 40 minutes. I think we can take the positives from that and I think that we can play with anyone in the country with that effort.”

Hawkey’s third period performance sealed the deal as he stopped all  9 shots he faced to help preserve the victory as Robert Morris again maintained a territorial advantage, but was unable to break through.

“If we play with that passion we played with for the last 40 minutes, we’re going to win a lot of hockey games the rest of the way,” Schooley said. “Our belief was high, we believe in this team and we did a very good job of getting back in the game after a slow first period. If we continue to play like that in our last 13 regular season games, we’re going to have a lot of success.”

Robert Morris will resume play on Tuesday, Jan. 9 with a visit to Niagara.