NEVILLE TWP. — Talk about a start to a college career. First-year Robert Morris forward Jaycee Gebhard has barely had time to figure out her class schedule, but that has not stopped her from being a dominant force on the ice.

Gebhard scored on her very first shift in her home debut at 84 Lumber Arena Friday night and scored six minutes later to pile on as the Colonials walked away from their home opener with a 6-3 victory over the RPI Engineers.

Gebhard finished the game with two goals, five shots, a block and a plus-1 rating. Her emergences makes the Colonials a scarier group than the year before, and their 3-0 record shows it.

Through three games, the scoring line seems to be a typical performance for Gebhard. She entered the game with four points in two games and kept her two points per game average alive. It is far too small of a sample size to project out, but at this rate, Gebhard would set the Robert Morris Women’s hockey points record very early into her junior year.

“You obviously never expect anybody to come out of the gate the way that she has come out. But it is definitely nice to see,” head coach Paul Colontino smiled. “She’s fitting in, she’s comfortable, she’s happy and I think that is showing on the ice.” 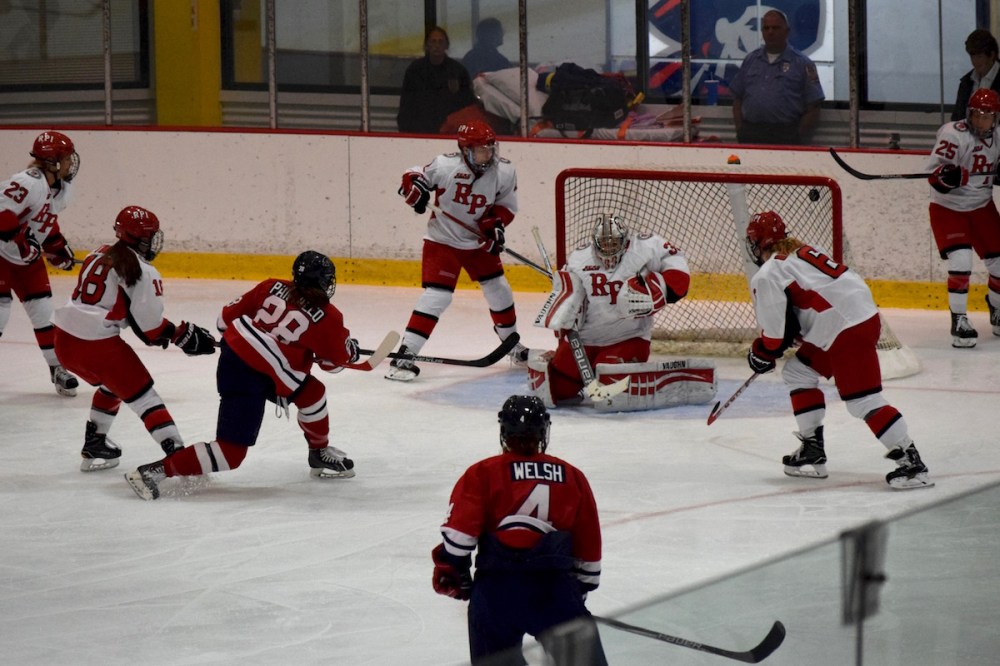 Click here for Mitch’s Pics — a gallery from the game.

The most impressive trait that Gebhard has shown as a freshman is her game acumen. She never seems out of position, and her ability to move without the puck and find space in front of the net is advanced for her age. It sets off a “chain of events,” as Colontino put it, that puts her in prime positions to put up points.

“She has a great mind for the game, she just understand the play, and she anticipates very well,” Colontino said. “She moves with the game and mentally, she grasps it. Because of that, she is in great scoring opportunities and because of that, she gets the puck a lot and with her mind, she does great things.”

“Most of my goals are rebounds, so credit to everyone else,” added Gebhart, a Regina, Saskatchewan native. “The first one tonight, honestly, was a lucky play. (Brittany Howard) ended up stepping on the puck, and it came right to my stick. I didn’t even know it went in until I looked down.”

While Gebhard may see it as luck, some see luck as preparation meeting opportunity. She clearly is prepared and is always in the right spot. Add in the opportunity of playing with Howard — the team’s leader in points last season — and the success has followed.

Early into the season, Gebhard and Howard do not look like two players with just three games of experience together. The two play a similar style of hockey, and it shows as the duo has 10 points combined through three games and rank as the top two point scorers on the team.

“The first time we put them on the ice, it looked like they had been playing together for a year,” noted Colontino. “It took one practice to see the chemistry, they move well together.”

“I think Britt’s speed is a big thing,” added Gebhard. “Coming from a junior level, the speed is a lot different, but playing with her you have to keep up otherwise you will not get the puck.”

If there is one thing in which Gebhard has proven through three games it is that she can keep up. The ceiling looks to be very high for the rookie, and while she probably won’t keep this pace, she looks to be an asset to the team that will not be going away anytime soon.

The Colonials finish up their two-game set with RPI on Saturday at 84 Lumber Arena.