The top three scorers on the Colonials last year were given the chance to spend a few weeks with Team Canada’s National Developmental program in August. 2018 graduate Brittany Howard, rising senior Kirsten Welsh, and rising junior Jaycee Gebhard were invited to the camp that helps decide in-part the future of Hockey Canada. All three spent time on the ice together at Robert Morris, with Howard and Gebhard skating as linemates and Welsh often taking her shift on the blue line concurrently. Including their Colonials teammates, the trio has been an integral part of the programs recent success.

The Colonials program has recently earned the respect of and has climbed the ranks of the CHA and NCAA, riding the results of a strong core that has developed chemistry while playing a hard-working and effective style of play. Individuals are recognized within the conference and NCAA a weekly basis, and underclassmen have been introduced to an environment where they were lead to success by a culture of winning, as 17 of 18 underclassmen return for the 2018-19 season. Rising junior Aneta Ledlova turned pro in Sweden this past offseason.

The camp officially began in May, with invitations to the preliminary camp. The first step in this process for team Canada did not consist of them being on the ice together.

“I got the call in May, that’s the first camp, it’s basically just directed towards off-ice fitness testing,” Welsh explained to Brian Mitchell in the PHD Podcast.

That camp served as the opportunity to set the standards for the expectations for players. It also resulted in the first round of cuts for those who were not up to the challenge, and all players that passed were expected to continue training throughout the summer.

All three Colonials were then invited to Calgary, a testament to their off-ice training habits- both at Robert Morris and individually.

In Calgary, the players were split into two squads, Black and Gold. Gebhard was placed on team Black while Howard and Welsh suited up for team Gold. The trio had the chance to showcase their skills on a national level while learning new ways to improve their game off-ice- including team chemistry, nutrition and strength. The players practiced and scrimmaging against each other, a U Sports team made up of players from Canadian Universities, and team Japan throughout the camp. During one of these games, against team Japan, Howard scored 5 goals. The main goal was to improve as an individual player, with a secondary goal that was important for their own national pride.

After camp let out, Gebhard was selected as a member of the developmental team and played in a mini series against the USA Development Team, allowing her to play in some high-level games. This was the forwards second time representing Team Canada. Prior to her time at Robert Morris, she played in the u18 World Junior championships, scoring four points in five games en route to Canada earn a silver medal.

This development camp series was an experience she definitely enjoyed and has her excited moving towards her junior season at RMU, and her future with Team Canada.

“After the series I head back to RMU to chase another championship with the Colonials,” Gebhard explained. “Hockey Canada will continue to monitor me throughout the year and then I will hopefully be invited to a senior camp in the future.”

The lessons learned attending the camp were valuable, and all three were very proud to represent both their university and their country. Going through the camp together also contributed positively to their experience.

Despite being at different levels of their respective careers, they all had key things they learned that they could improve upon in their careers. Howard, now with the Toronto Furies will be able to use this experience to prepare for professional hockey. Gebhard has two seasons of college hockey to implement some of these best practices and techniques she learned, while Welsh, entering her final season, will be ensuring her and her teammates cherish the experience. 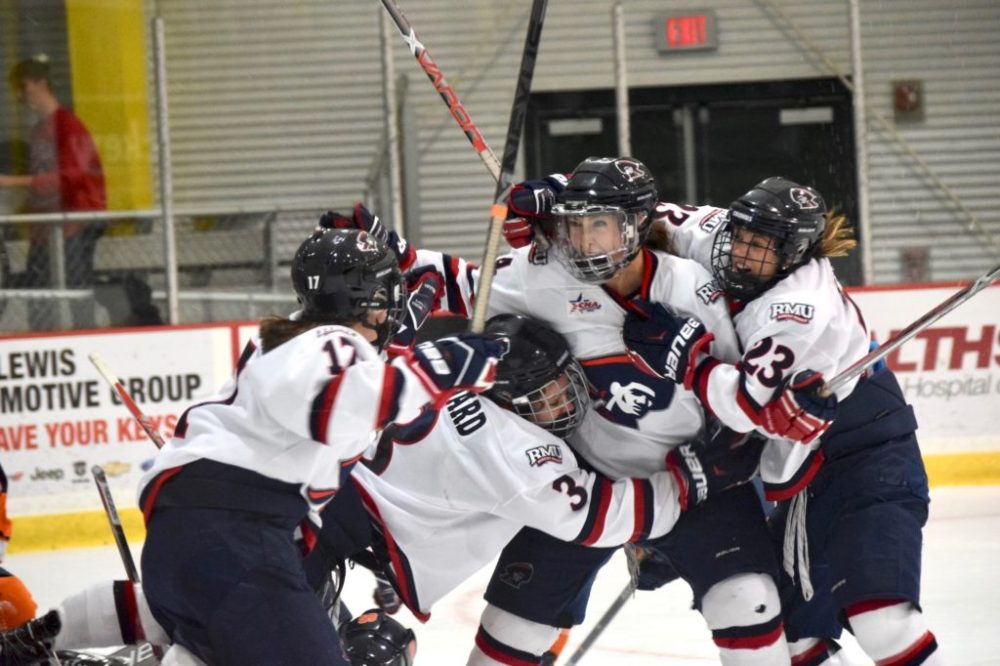 An instance where Gebhard, Howard and Welsh were on the ice together late in the third looking for a tying goal. It worked. — BRIAN MITCHELL

I caught up with Howard and Gebhard about their experiences at the camp. Brian Mitchell also spoke with Kirsten Welsh on the PHD Podcast about her experience. Here is a lightly edited transcript of the conversations.

Pittsburgh Hockey Digest: What was a typical day at the camp like? Who were some of the coaches?

Brittany Howard:  Once we arrived in Calgary we completed 2 days of fitness testing and then were divided into 2 teams to compete in games for the week before the selection process on Sunday. Before entering games against team Black, Japan and U Sports we had team practices while also completing a skills session with Mike Ellis, the skill director for the Toronto Maple Leafs who is also from my hometown St. Thomas, Ontario.

Jaycee Gebhard:  The camp took place August 2nd-12th, there were about 40 girls there. On the 12th the coaches made cuts and ended up taking 22 players. Those 22 players then got the chance to wear the Team Canada jersey and play a 3 game series against the United States. Nadine Muzerall was the head coach, she is the head coach as Ohio State, Britni Smith and Candice Moxley were assistant coaches and they coach at Clarkson and Western University respectively. There were 4 scrimmages during the first 10 days, they were full-length games and all rules applied so that the scouts could evaluate us in a game setting. During the day we would have either practice or pre game skate in the morning and then 1-2 meetings throughout the afternoon, then would head to the rink for our game that evening. It was a busy schedule but it allowed us to learn a lot in a short time period.

Kirsten Welsh: It was a great ten days. It was really exhausting, but that’s what you train for all summer, for the invite. It was definitely an experience I’m not going to forget.

PHD: What were some team-building activities you did to develop chemistry while at the camp?

BH: One team building activity which stood out to me was when our physiotherapist ran a Zumba session for our team. Being in a tense environment this allowed our team and coaching staff to lower their barrier and release stress, which built team chemistry.

JG: We did one large team building activity between the two teams, and team Japan which allowed us to get to know each other and to bond with the Japanese team. We did minute to win-it style games which were the most fun team builders we did at camp. This helped us build chemistry because we had to work together in small groups to try and earn points for our team and it also allowed us to work with the coaching staff and gain more trust with them.

PHD: What did you learn from the camp and how will that help you moving forward?

BH:  My biggest takeaway from this camp is the mental skills portion to my game. We had a mental skills coach who we met with on 2 different occasions and he also completed 2 seminars with our team during the camp.

JG: I learned a lot about different ways to take care of my body and to continue to develop physically and mentally. Being able to maintain strength and energy during a season so that each summer I am getting stronger and not starting back at square 1. It will be fun to explore and implement the many things I learned into my routine at RMU.

KW: Honestly there is a lot of knowledge and obviously they teach you individual sets of skills, but just being a good person, a good teammate and just really working your hardest for your final year. … At camp there’s hockey skills, then there’s nutrition skills, and strength skills, but personally I don’t think that’s mine to bring to the team, I think that’s already established here. But if anything it just kind of taught me to be more of a motivator. Bring people up and just make them realize that four years goes by really quick. 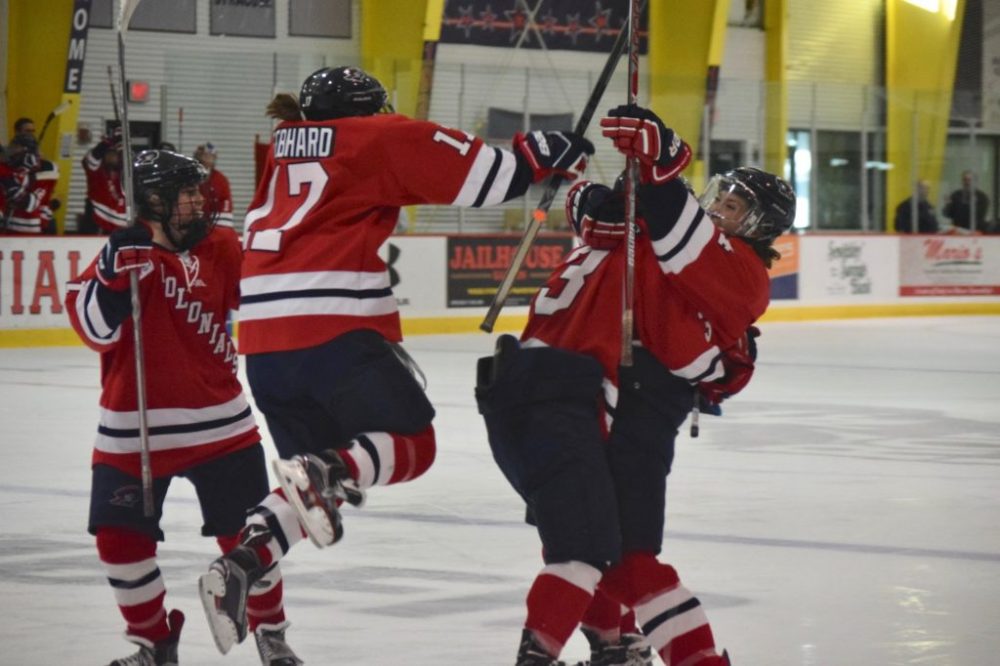 PHD: What was your favorite part of camp?

BH:  My favorite part of camp was the games, I hadn’t played in  a game situation since our season ended in March and the feeling of putting on that jersey again is something to never take for granted.

JG: My favorite part of camp was definitely getting selected to be on the series team and getting to put the Canadian Jersey on again! It is a special feeling that is hard to describe.

PHD: How does it feel representing your country at this level?

BH: Being able to put on the maple leaf is a dream come true

JG: It is an honour to be able to represent my country at this level. Of course my ultimate goal is to play in the Olympics and making the development team makes that dream one step closer! Getting to play at that level this summer pushes me to want to achieve above and beyond! There aren’t a lot of words that can describe the feeling of playing for your country and hearing your anthem, it really gives sight and reward to the hard work over many many years.

PHD: What was it like going through the camp with two other Colonial teammates?

BH: Being able to have 3 players from RMU shows the growth of the program. The support from not only our coaching staff but from the university and Dr. Howard allows us athletes the opportunity to improve and grow. On a personal note having the comfort of Jaybird and Welshy at camp was awesome even just being able to have the opportunity to reminisce before they head back to school.

JG: Having Welsh and Britt at camp really made it more comfortable. I was able to rely on them for support and to have a few laughs. Although since I was on a different team then them both we had to stop being friends while on the ice! It was so amazing to have 3 of us from RMU there and to show the kind of players that RMU has to offer!

KW: It was phenomenal being able to represent RMU and just kind of get to spend it with those two guys. It made the experience a lot better just to kind of relate it back to our season and how we have been playing together for the past couple years here. It was definitely nice to have some pals there as your go-to, but it was nice to represent Robert Morris for sure.