Like many of the program’s alums, John Rey went on to play professional hockey after his time on the RMU hockey team. He spent time with the Knoxville Ice Bears and Birmingham Bulls in the Southern Professional Hockey League as well as the Norfolk Admirals and Rapid City Rush in the East Coast Hockey League. In playing professional hockey, he was able to achieve a goal that many hockey players set out for themselves, but not all achieve. Now, he’s ready to take the next step in his career, in another high-intensity but very different role: an official.

After two years of playing in the pros, Rey decided it was time to hang up his playing skates, and figure out the next step in his career. There was no doubt that he wanted to remain in hockey, but he wasn’t quite sure what that role would be. Perhaps he could be a coach, or maybe go into the business side of the sport. Eventually, he came to the conclusion that being an official would be the best move for him at this point in his career. Thanks to connections he made at both the college and professional level, he was able to get moving quickly in this new field.

“I knew (Furman) South very well doing the hockey camps on the island (at the RMU Island Sports Center) for three or four summers so he always talked to me about it and I knew (Brandon) Blandina had gotten into it last year,” he shared in a phone interview with PHD. “So when I knew I was going to hang up my skates from playing I had a couple options to look over. One of them was officiating so I made a couple calls to Furman and Blando to see how they liked it. My coach in Birmingham, Jamey Hicks is very good friends with Al Kimmel who is part of the officiating team, and the NHL works hand-in-hand with Stephen Walkom (NHL director of officiating) who lives right there in Moon Township, so I had some good contacts, and being a former pro opened up an avenue for me to get to the combine.”

The Exposure Combine has been in place for five seasons, with its goal being to help former college and professional hockey players get on a fast track to becoming high level professional and potentially NHL officials. Furman South, a former captain who graduated from RMU in 2012 was one of the first beneficiaries of the program and made his NHL reffing debut last season. This year, South’s classmate Brandon Blandina, who had also gone through the combine, was signed by the NHL to be an official, and is well on his way to reaching the NHL.

For Rey, the combine was an opportunity to give officiating a shot. He had no experience, but went in with an open mind and was ready to learn. Part of the combine was learning about the specifics of being a referee versus a linesman. Prospective candidates are asked for their preference as to which role they want to pursue.

“Some guys just wanted to be a linesman because they enjoyed the aspect of breaking up fights as well as not having all the pressure on them to make the right calls all the time as far as penalties and having to control the game,” he explained. “Other guys wanted to wear the orange band and be the referee and make sure they were the guy that had the pressure on them. I wasn’t sure what I was going to do, obviously I liked being in the middle of the tough stuff and fights so I definitely thought that was going to be a cool aspect, but I also gravitated more towards reffing with my opportunities. I thought I could be better with those opportunities right away and I like the fact that I was more in control as a ref than as a linesman.” 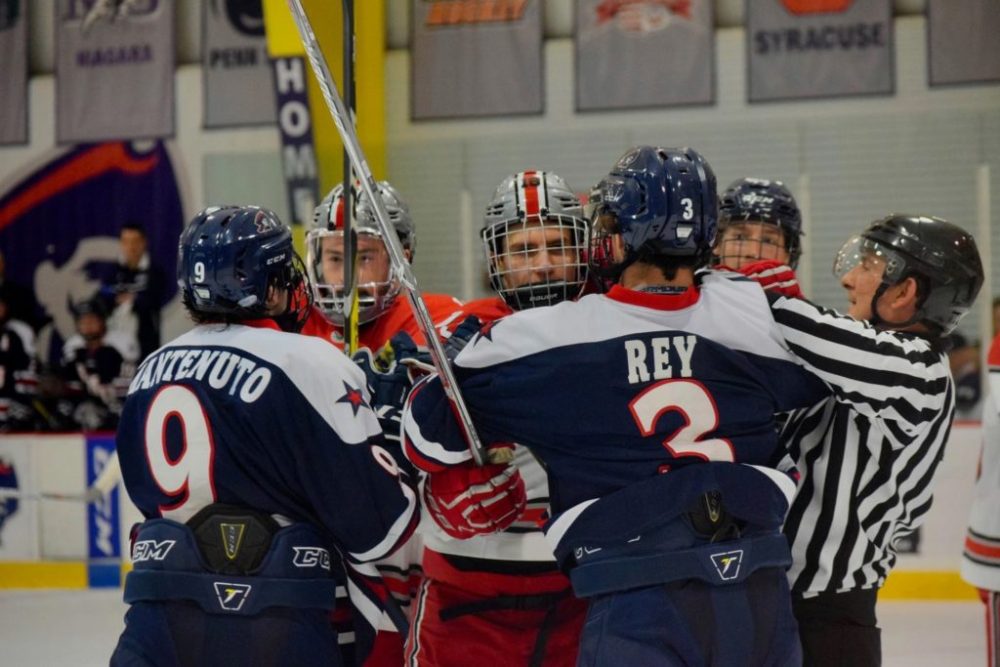 Transitioning from being a player to a ref can be difficult. The excitement of scoring goals and being with your teammates is no longer a part of being part of the game. Additionally, the officials are required to govern the game, monitor the physical aspect of the game, and break up fights. This physical aspect of the game was a part that Rey was no stranger to. In college he was never afraid to make a big hit or protect his goaltender after a whistle. In both juniors and the pros he wasn’t afraid to drop the gloves.

Now on the other side, partaking in the physical part of the game is something he will admittedly miss. Some of his former teammates joked with him that they weren’t sure he’d be able to break up altercations given the playing style of his that they were familiar with. However, given some of the insight he received at the combine he is confident that having played like that will actually give him an advantage as an official.

“Some of the advice I got at the NHL combine was to take the standards of play that they are trying to implement but also take the way that I wanted the game to be officiated under consideration,” he noted. “I’ve already started my reffing tenure so I’ve tried to instill the type of hockey that I liked to play as an official. I don’t like the stickwork, but the tough penalties I didn’t really call. Hockey’s a tough sport so it was definitely interesting to be on the other side of it, but it’s definitely a cool perspective to see.”

That tenure is off to a good start. After the combine he was able to get into the rotation as an official in two leagues, both of which he is already familiar with. He will be serving as a referee and a linesman in the North American Hockey League, which is the Junior A league he played in before coming to Robert Morris. He spent three seasons on the Amarillo Bulls, serving as captain his final year and leading his team to the Robertson Cup Champions (League title). He’ll spend a majority of his time as an official in this league as he looks to get games under his belt and build up his experience as an official.

Additionally, he will be a linesman in some college hockey games taking place in the Eastern College Athletic Conference (ECAC). Since Princeton is close to his home in southern New Jersey and Connecticut schools Quinnipiac and Yale are just a few hours away, it was a logical fit for him to get some experience officiating at the collegiate level, where he of course had experience as a player for Robert Morris. Between these two leagues, he hopes he can get a good taste of being an official to prepare him to make the jump to being an official in professional hockey.

“Do some lining, do some reffing and hopefully do really well at it, and hopefully get back to the combine next year and transition into pro hockey,” he said. “It seems like that is kind of the avenue that formerpros are taking, one year to get some experience under their belt, I had none coming into it, so get the year of high level experience under my belt and hopefully transition to a higher level of pro hockey for my second year, but I guess that will all be up to how I do and what the officiating team thinks of me but I’m just excited to do Junior A and the ECAC this year.”

As was mentioned earlier, Rey’s initial impressions are that he would prefer being a referee. He will of course be getting to practice being both a referee and a linesman this season though, which will help him learn the ins and outs of both positions. As he’s gone through the combine and gotten his first taste of being an official, he has unsurprisingly learned a lot about the two roles, some of which came as a bit of a surprise.

As Rey embarks on this journey, and works to advance within the ranks as an official, he definitely has the benefit of some familiar faces that can help him out. With two fellow RMU alums ahead of him on a similar track, it’s likely that they will have gone through any difficult situation he will be faced with. Furman South and Brandon Blandina helped Rey get his foot in the door and to the combine, and now they are still valuable resources to him. 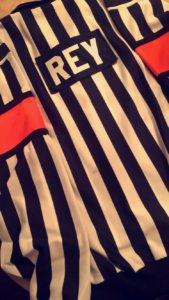 “They both are well respected guys amongst anyone you talk to that knows them,” he remarked. “It’s no different for me, those guys have been helpful along the way whether it’s just giving me advice of who to talk to or who to reach out to, advice on scheduling, advice on different situations on the ice. They’ve both been instrumental. Just starting off I’ve definitely fired off a bunch of questions to them and they’ve been awesome with answering those questions.”

Along with being valuable resources for questions, they also are a first-hand example of becoming successful in the field. Both South and Blandina rose through the ranks quickly and are now signed to NHL deals as officials. Rey can look to them as motivation for his potential path as an official.

“They’re both on their own growth path, I know Blandina signed an NHL deal this year and Furman had one last year, so if I could follow in their footsteps that would be awesome,” he said. “I know Furman had his NHL contract after three or four seasons and Blando after two, so if I could follow those footsteps that would be amazing. I’m just trying to learn as much as I can from those guys, they’re great examples both on and off the ice of how to handle yourself.”

Walking away from being a hockey player is never easy. Being a hockey player is a way of life, especially for those like Rey that reach higher levels like college and the pros. While the competitive and team aspects of hockey go away now that he is an official, he is still able to be involved with the game he’s known seemingly forever, something that was very important to him as he looked to make his next step. He has the opportunity to learn a new aspect of the game and it gives him a potential avenue to reach even higher levels moving forward.

It is clear that he’s looking forward to the journey, as he reflected, “I always knew I wanted to stay in hockey, and right now it seems like this is the best path for me, so I’m definitely excited to see where it takes me.”