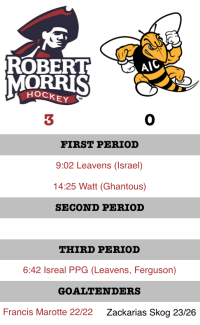 NEVILLE TWP, Pa. — Sometimes, it’s simply a matter of taking care of business. The Robert Morris Colonials did just that on Friday night at 84 Lumber Arena.

Behind a shutout performance from freshman sensation Francis Marotte and an opportunistic offense that managed three goals on 26 shots, the Colonials made their way past the visiting American International Yellow Jackets with a 3-0 victory.

The Colonials struck twice in the first frame with goals coming off the sticks of Daniel Leavens and Brandon Watt, but the score wasn’t necessarily indicative of the battle level they brought to open the game.

“You have to deal with some adversity,” head coach Derek Schooley said. “I was critical of us after our first period, I thought we were just kind of blah. We had some really good shifts later on in the game where we kept the puck in, we had some chances that we didn’t bury. If we were doing a one through ten rating on our team, a lot of guys would get fives tonight. You get a lead and you want to not let a team hang around and tonight we let them hang around a little bit.”

They can’t do much better defensively, with Marrotte needing just 22 saves to earn his second career shutout. Even more impressively, the defensive performance came without the services of senior captain Rob Mann, who missed the game with a lower-body injury.

But despite his absence, the Colonials’ back line stepped up their game, limiting shots while keeping the AIC power play — which had been scoring at a 24-percent clip coming into the weekend — off the score sheet completely. A pair of freshmen defensemen in Sean Giles and Alex Robert helped lead the way in the critical conference matchup.

“I think Alex Robert has been very good since he’s been in the lineup,” Schooley said. “He was very poised with the puck, very calm. Unfortunately we’re down to six defensmen so we need him and Sean Giles to play in some situations they haven’t played in before and they’ve stepped up and done the job, and Alex Bontje does everything that you ask him to and a bit more.”

Eric Israel provided some offense from the blue line with a power-play insurance goal from the slot at 6:42 of the third. It was his sixth goal and 19th point of a season that has seen him eclipse his freshman season totals and then some in a little over half a year. Israel shared some insight on what the team was focusing on coming into the weekend and what has helped the defensive corps come together to provide some of their best play of the season in the latest stretch of action.

“The past couple of years we’ve always had a big weekend against a ranked opponent and played AIC and unfortunately lost so that was in our mind all week during practice,” Israel said. “Overall, we didn’t play our ‘A’ game but we got the job done. All of us have a great relationship with each other, we have a really good chemistry on the back end.”

Offensively, Leavens opened the scoring for the Colonials at 9:02 of the first when a long shot from just inside the blue line seemed to fool starting Yellow Jackets netminder Zackarias Skog.

Brandon Watt then doubled the lead at 14:25 when his shot off the rush found the back of the net. It was the first tally of the season for the sophomore forward who had missed 12 games earlier in the year due to injury.

The chemistry and commitment on the defensive side of the puck has helped one RMU player become one of the best at his position in the country.

Marotte shutout was the second in his last three games and he has made it look easy so far this year. The defense kept the Jackets from sniffing any sense of a way back into the game. When they were able to put a quality shot on the net, Marotte was there. The freshman netminder decreased his goals-against against to a very slim 1.62 and now sports a .950 save percentage — tops in the nation.

He credits that to a defense that makes his job easier. But when shots do come his way, Marotte has been as calm and collected as can be in his handling of the position.

“It’s a big win after the tournament,” Marotte said. “We came out pretty strong and shut them down pretty nice. I just try to think about the next shot, and it’s always been that way since juniors, I go one shot at a time. If there’s one that goes in, it’s over with and I just concentrate on the next one.” 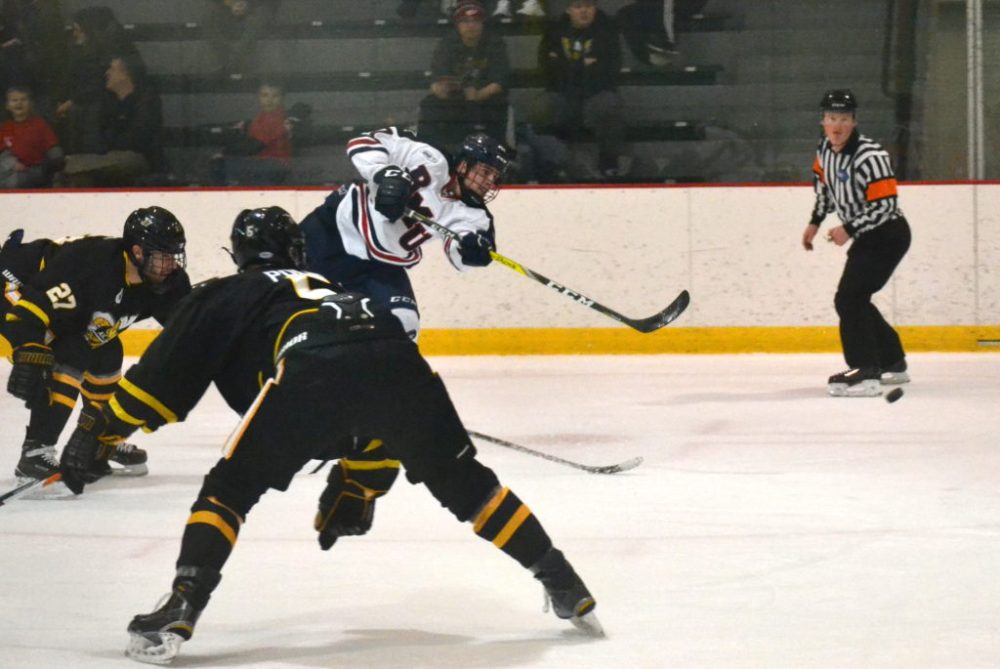 Forward Brady Ferguson was named Atlantic Hockey player of the month for December. In eight games, he had four goals and nine assists.

Marotte was named the conference’s rookie of the month. He posted a .953 save percentage in December and was also named the AHC goaltender of the week after he made 75 saves and was named the tournament MVP of the Three Rivers Classic.