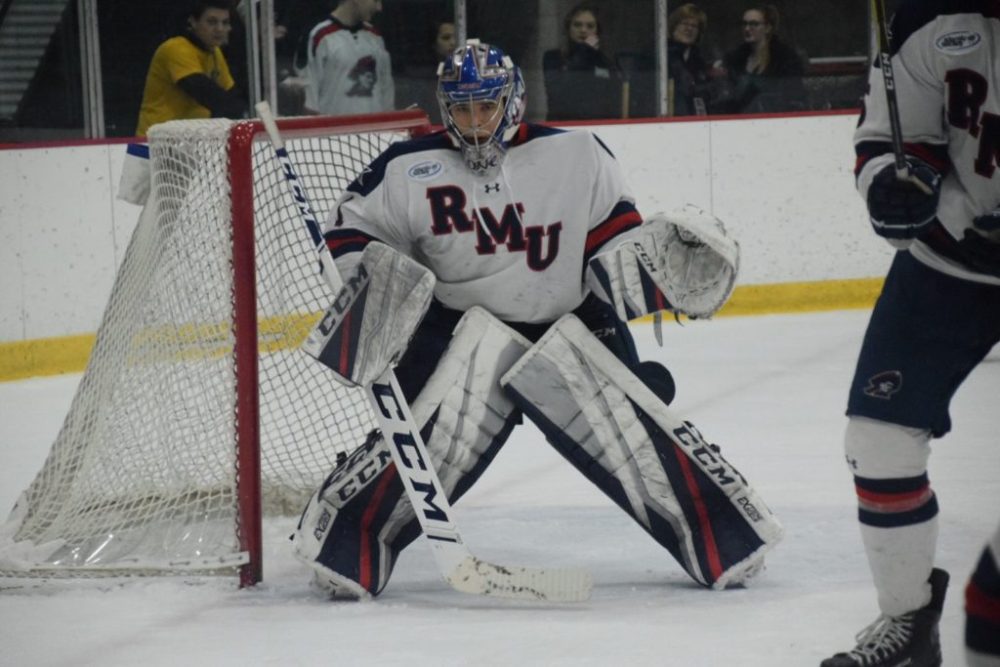 NEVILLE TWP., Pa. — The performance might not have been pretty, but it was effective. Friday night, the Robert Morris Colonials made great use of Luke Lynch’s second period goal, riding it to a victory backed by another strong performance in the net from Francis Marotte. The junior goaltender and Mike Richter Award watch list standout stopped 36 shots en route to his eighth career shutout as the Colonials struck first in their weekend series with the Holy Cross Crusaders with a 2-0 victory.

The Crusaders managed to nearly double the Colonial shot total and held the puck in the Robert Morris end for long stretches at times. Meanwhile, they kept the Colonial attack at bay, allowing little in the way of second chance opportunities for 60 minutes of hockey.  However, Marotte and a defensive effort that managed to keep the most dangerous chances to minimum while only taking two penalties on the night that propelled the Colonials to the win which evened their record on the year at 7-7-1.

“We just found a way,” Colonial head coach Derek Schooley said.  “Our goaltender was outstanding, we scored some timely goals and I thought our defense was really good after a couple of scrambles.”

The Crusaders came close on several occasions to tying the game as they struck iron on a second period power play while at the same time, Colonial defensemen Nolan Schaeffer and Sean Giles both managed to keep pucks out of the net on two rare chances when Marotte found himself not in position.

“I really didn’t like our energy,” Schooley added. “I wanted us to be a little bit better off the start and I thought we were chasing the game. We didn’t generate a lot but we made the one count and when your goaltender is as good as he was and our defense was pretty good in front of him as well. We have to make sure that we go into Christmas break feeling really good about ourselves. We haven’t played great the last nine periods but we found a way to get two wins.”

While there were some bounces that went the Colonials way in the win, Marotte turned in one of his best performances of the season, giving the Crusaders one moment of frustration after another. He moved into second place in the all-time Robert Morris shutout record books with the win and looked relatively effortless in doing so.

“I think I found a way to feel good right away when the game started,” Marotte said. “We were expecting them to come out hard and they did and tomorrow they’re going to come out even harder. We got a couple of bounces too tonight which was huge, we’re gonna need those bounces if we’re going to win games like that. It wasn’t pretty but a win’s a win.”

Lynch Turns Up The Wick

Junior forward Luke Lynch has been one of the catalysts of the Colonial attack of late as had been expected coming into the season. After a slow start to the year, Lynch has managed three goals and five assists in his past six games including  his goal at 1;58 of the second period which proved to be the game winner as he sent a pass from freshman Justin Addamo past Crusader netminder Erik Gordon.

“I definitely feel a little bit more confident,” Lynch said. “I just need to keep putting more pucks to the net, taking my body to the net and causing havoc in front and the pucks will find their way in.”

Following two seasons and two straight post seasons that saw his side end the Crusader campaign for the year, Lynch is completely aware of how the Colonial’s opponent operates and what to expect in the Saturday afternoon match up and how to adjust to it.

“They definitely pack it in. We have to make sure we’re getting shots in from the point and making it hard for them to keep us out of those areas by putting our bodies in front of there and making them really work to get us out of there. Whenever we get them expanded in their defensive zone then we attack the holes that we find.”

The Colonials and Crusaders conclude their weekend series on Saturday afternoon at Colonials Arena at the Island Sports Center. Puck drop is scheduled for 4:05 p.m.