ERIE, Pa. — For a brief moment, Robert Morris had the No. 1 team in the country on its heels.

The Colonials, facing top-seeded Northeastern in the quarterfinals of the 2021 NCAA Tournament at Erie Insurance Arena on Monday afternoon, came into the game as significant underdogs to the Huskies.

Late in the second period, the Colonials got a goal and all the momentum when senior defender Emily Curlett’s slap shot’s when off the bar and in behind Northeastern goaltender Aerin Frankel.

The goal, coming with just 56 seconds left in the second period, made it a one-goal deficit as the teams seemed set to battle in a decisive third period.

Instead, the stars of Northeastern came through. Huskies center Alina Mueller, a three-time finalist for the Patty Kazmaier Award, won a faceoff in deep in the RMU zone, rotated to the far slot and got her stick on a bounding puck to put it past Raygan Kirk and into the Robert Morris net with 3.8 seconds left on the clock.

The late-period goal gave the Huskies the momentum and the experienced squad was able to prevent the Colonials from ever getting it back, finishing with a 5-1 victory to send Northeastern to the national semifinals. 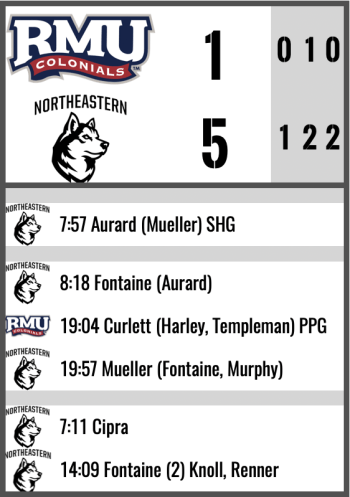 With the two-goal cushion in the third period, Northeastern was able to sit back and absorb the RMU rush, while looking for opportunities to strike on the counter-attack.

Katie Cipra stripped an RMU defender and scored unassisted at the 7:11 mark of the third and Skylar Fontaine redirected a centering pass from Katy Kroll past Kirk with 5:51 to play.

With the Huskies focusing on defense, Robert Morris managed just four shots on goal in the third period.

The second was RMU’s best frame, as the Colonials pushed hard against the nation’s best after absorbing a one-goal deficit in the first. Curlett’s goal came on the power play after she collected the loose puck from a block Emilie Harley shot and one-timed it past Frankel.

Northeastern had pushed the advantage to 2-0 just a minute and a half earlier when Skylar Fontaine scored on a breakaway.

The Huskies had also taken advantage of the Robert Morris defense in the first period, when Chloé Aurard finished a 3-on-1 while RMU was on the power play.

Kirk finished with 41 saves for Robert Morris, which was making it second NCAA Tournament appearance in program history. The Colonials also lost in the quarterfinal in 2017 with a 7-0 loss to Wisconsin.

Northeastern will face the winner of Minnesota-Duluth and Colgate in the first national semifinal of the Frozen Four on Thursday.