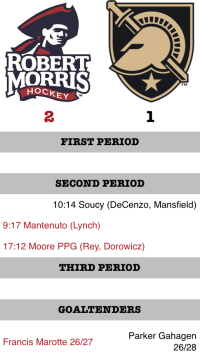 NEVILLE TWP. — For the Robert Morris men’s hockey team, the power play continues to be a strength, as the Colonials used a late power play goal to beat Army West Point, 2-1, at 84 Lumber Arena Friday night.

The Colonials came into the weekend with the second-ranked power play unit the nation. With Timmy Moore’s late second-period deflection of John Rey’s point shot, they went 1-for-5 on the night (20 percent), which actually lowered their season number to 28.12 percent.

Regardless, it’s been a strong start from the man-advantage unit, and Friday’s goal showed the depth that Robert Morris possesses there, with the second unit coming through.

Moore, a junior, has scored plenty of big goals for the Colonials over his career, but the power play is a new challenge for the Grosse Pointe, Michigan native, who hasn’t played on the man advantage regularly since high school.

“I just kinda work hard,” Moore explained. “I’m the net-front guy, so a lot time after practice, we’re just working on that. Just get to loose pucks in the corners, get in front of the goalie and help out however I can. … It’s fun. I’ve embraced it. I love it.”

The play that led to Moore’s big goal is something that he and Rey have worked on countless times. Spencer Dorowicz’s pass to the point set up Rey for a one-timer and Moore angled himself into the slot — perfect positioning for a deflection. 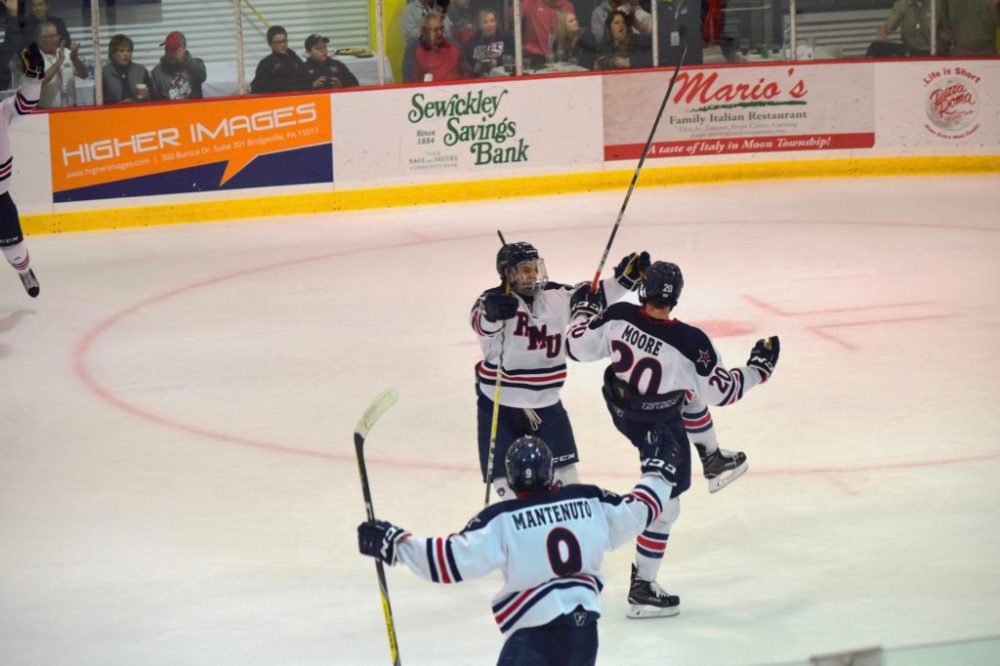 “Rey and I are out everyday after practice working on tips,” Moore said. “It just felt like a natural play happening. Luckily, I got a stick on it.”

“That’s something that he’s always wanted to practice, so every day after practice, I’ll throw a few at him,” Rey added. “It doesn’t go well all the time. Sometimes I actually hit him and he doesn’t like it too much, but it’s a skill that Timmy’s very good at it. …  It takes a lot of courage to do what he does, standing in front of the net.”

The play was especially satisfying for Rey, as he was beaten defensively on the Black Knight’s lone goal. A slice of redemption has sort of been the theme to his whole season.

Bumped from the starting lineup by then-freshman Eric Israel a year ago, Rey kept working and has been rewarded with a significant opportunity in his senior year. He’s been playing on the second defensive pair and manning the point on the second power play unit.

“John’s a very prideful guy and he wants towants to make the best of his opportunity,” said head coach Derek Schooley. “So far, he’s taken advantage of it. There’s things John can improve in his game, but he’s done everything he’s been asked. He’s been a good teammate.”

Of the members of that second power play unit, Rey is the only one with experience at the Division I level. The point is a natural quarterback of the power play, and Rey has taken to the responsibility.

“I just try and have everyone do their role,” he said. “I don’t think anyone needs to go above and beyond. Being the senior on that unit, I know I don’t need to go above and beyond. Everyone’s on that power play for a reason. Whether it’s passing the puck, shooting it, tipping it, whatever. As long as everyone’s buying in, it doesn’t matter who scores the goal.”

Rey’s had a pair of his point shots tipped in so far this season, and that’s something he’s OK with as long as the team keeps scoring.

“I’m alright with that,” he said. “The goal on the power play is just to score goals. [assistant coach Kody Van Rentergem] has preached that if we get one goal a game, he’s happy with us and that’s the team’s goal. My unit got one tonight. The other unit’s been pulling a lot of weight, so it’s nice to see we got one.”

Schooley was obviously pleased with his second unit’s goal and was particularly happy with the battle level of Moore all game long.

“Moore was cramping during the game, but he didn’t miss a shift,” Schooley said. “He was eating bananas on the bench in between his shifts, so he wasn’t cramping.”

Army is known as one of the most physical teams in the league and were picked to be one of the top teams in the preseason goal. The win against the Black Knights should help the Colonials sort out where they sit in the conference.

“There’s probably the toughest team in our league to play, physically,” Moore said. “It’s definitely a good test for us a and a battle.”

“[We’re] a young team trying to establish themselves and the other team is a veteran team trying to take the next step,” Schooley said. “I thought teams found their ways and found what they needed to do. I thought we played pretty well.”

With 10 freshmen, the Colonials are bound to celebrate a few firsts this season, and Friday was no exception, as forward Daniel Mantenuto tied the game at 1-1 with his first collegiate goal.

“Daniel Mantenuto gave us a spark,” Schooley said. “He won the battle by himself in the offensive zone.”

Mantenuto’s shot from the right-wing circle went off the iron to the left of Army goaltender Parker Gahagen and he didn’t even see it go in the net.

“I saw it hit the post and I saw it go up, so I honestly thought it didn’t go in. But then I saw everyone raise their hands and celebrating.”

That’s when the emotions hit.

“It was unreal. I can’t even describe it,” Mantenuto said. “I had a lot of chances last weekend, so to get the first one at home tonight was a pretty good feeling.”

Awarded his second consecutive start, freshman goaltender Francis Marotte responded nicely again, turning aside 26 of 27 Army shots. Schooley thought his team played well in front of him and that Marotte was up to the task when called upon.

“When we did have a breakdown, Francis was good,” Schooley said. “He didn’t have to be great.”

Schooley still hasn’t decided who will play in net on Saturday, when the two teams meet again at 7:05 p.m.