Gamble in the lab at the University of Alberta where she researched diabetes with Dr. Shapiro - PHOTO PROVIDED

College hockey allows student athletes to play the game they love while earning an education that can set them up for success no matter what path they might take after graduating. Anissa Gamble, a standout hockey player, graduated from RMU in 2016, majoring in Biology with a concentration in Pre-med and minor in chemistry. Since graduation, she has taken advantage of both of these aspects of her time on campus in the two years since.

Gamble is now a professional hockey player, currently a forward on the Toronto Furies of the Canadian Women’s Hockey League (CWHL). Along with that, thanks to her scientific educational background, she has created an initiative known as Thumbs Up Diabetes, with a goal of improving diabetes management for people living with the disease.

After graduating from RMU, Gamble moved on to the University of Alberta in Edmonton where she got an internship at a lab. As a leader in diabetes research in the entire world, this was a great place for her to continue learning more about something she is very passionate about.

“I went there, did my master’s in experimental surgery, so I was kind of living in my lab a lot but I got a lot in research and quite a few papers published and learned so much about diabetes,” she shared in a phone interview with PHD. “That’s what really got me going, because I worked in this whole building of diabetes research at the University of Alberta. I got to really connect with other people and seeing all of these other different aspects of diabetes that I never really saw as a patient so it really opened my eyes.”

A lot of her work was with a supervisor named Dr. Shapiro, who evaluated islet transplantation for type 1 diabetics. It’s still in the clinical stages, but is something that could potentially be a significant treatment option for diabetics. This is where Gamble did a lot of her experimenting and research.

Her time in class, experimenting in the lab and conducting research allowed her to expand her knowledge into the science of diabetes. She also was able to learn more about the lifestyle aspect of diabetes management thanks to her involvement with an organization called Connected In Motion.

“When I got to Edmonton I wanted a new challenge because I stopped playing hockey, so I reached out to a couple people who were actually biking across America for a thing called beyond Type 1. I saw that they were Canadian so I reached out to them to find out how I could get involved and do something as cool as this,” she said. “They pointed me into the direction of this organization called Connected in Motion which essentially does outdoor activities and peer-based education.

“So I applied for this adventure hike, which was on the North Coast Trail which is essentially a 6 day backpacking hike along the north shore of Vancouver Island, and it was going to be done by all type 1 diabetics. So I applied for it and I got accepted and in my head I was like ‘Ok umm this is just going to be a hiking trip, I’m excited, cool.’ But what actually happened was I actually got to be able to talk about my diabetes and talk to other people about their struggles and then I could take my knowledge that I was learning in school and apply it to my physical activity and apply it to other people and I just got kind of like a light and a passion with it.” 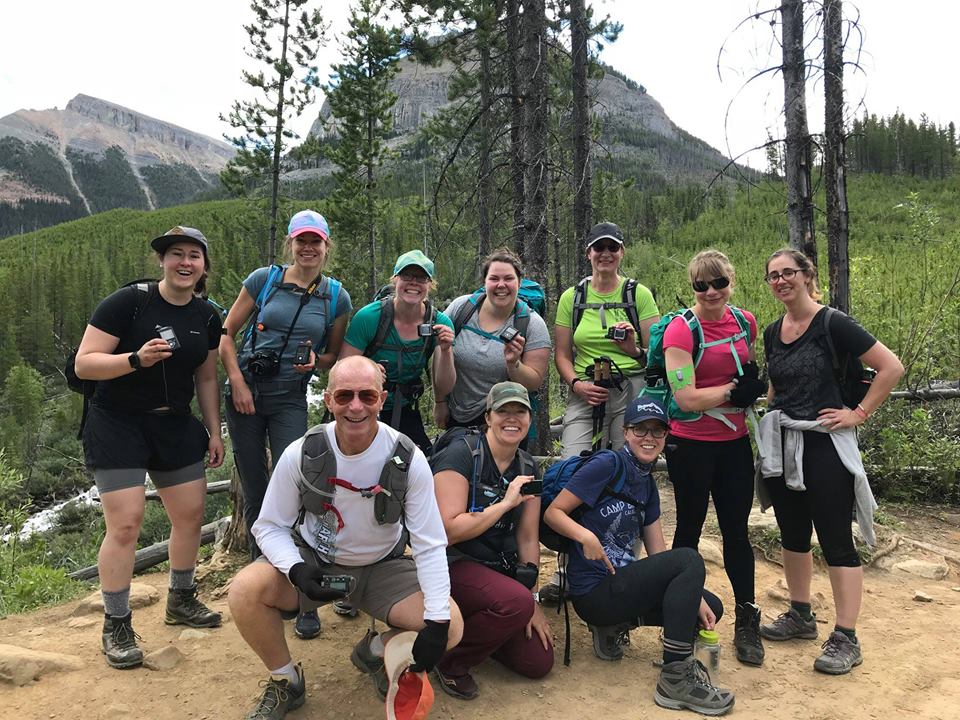 Her involvement with this organization, and the network of people she developed as a result, wound up benefitting her substantially. Gamble had a group of people she could interact with and who could understand some of the struggles with diabetes she was going through. She began to figure out how to manage her own diabetes and blood sugar better.

Gamble also attended a camp in California with other diabetics, where she led some canoeing trips and hikes. The whole time, everyone was able to interact and share the various ways diabetes had impacted them. This really hit home with Gamble, as she realized what was missing as a result of only having doctor treatment of diabetes.

“I just realized the impact (of having people to share with), you go to the clinic and you get to see how your A1C’s are, which is like telling you how good your blood sugars are, and that’s it,” she reflected. “You get a couple brochures and pamphlets but you don’t really get to talk to people and really get down to the core of what’s occurring.”

As she completed her master’s program, she had to decide what was next. She debated further education, or even dental school, but decided that for now she wanted to pursue some of her passions: hockey and diabetes management/education. In her final year of grad school, she was on the practice squad for the Calgary Inferno, also of the CWHL. This year, she decided to move back east and give hockey another shot.

“I figured Toronto was on the way (home to New Brunswick), and I always wanted to play a year of pro hockey, and I admire Toronto a lot, I used to live here,” she explained. “So my dad drove back with me and I said ‘Dad, get a flight from Toronto and if I make the team I’m staying here and if I don’t I’ll just keep going to New Brunswick.’ Now I’m here, and I’m setting my roots and figuring out whether I want to go the med school route or dental or maybe a Ph.D.”

Gamble has really enjoyed the opportunity to play hockey competitively again. She earned her first career point on November 24, when she assisted on a goal by former Canadian Olympian Natalie Spooner. Playing for the Furies has also re-connected her with a former RMU teammate, the program’s all-time leading scorer Brittany Howard.

“It’s so much fun,” she exclaimed. “I didn’t realize how much I missed it until I started playing again. It’s pretty cool I get to play with Howard and I get to see her every day (laughs), but it’s such an honor and I’m really happy to be here. I keep saying that but I really mean it. I know I really appreciate just being able to come out and play with the girls and playing at this high level.” 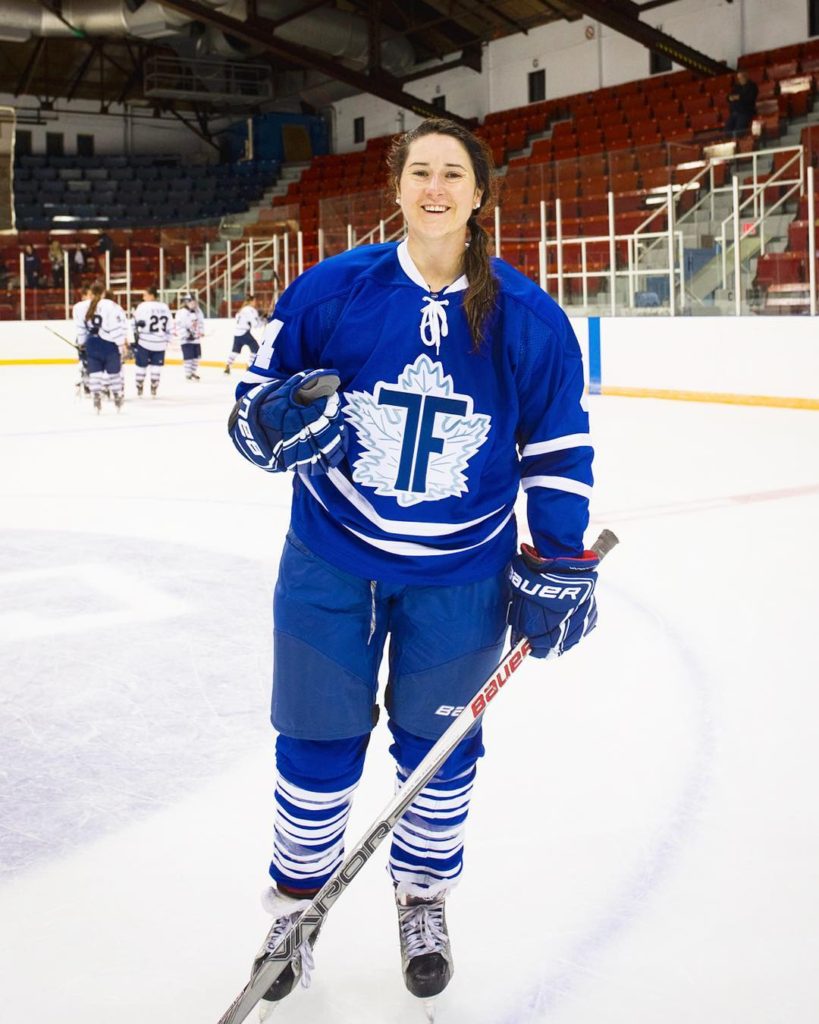 Now that she is in Toronto and playing hockey, she decided to dedicate her extra time to a new diabetes initiative. The initiative, called Thumbs Up Diabetes, is focused on changing diabetes education through holistic diabetes coaching. This is a great way for her to be able to apply her scientific background in diabetes while also adding in an element of diabetes management that she has deemed to be essential given her recent experiences.

Thumbs Up Diabetes is still in the early stages, but Gamble is focused on spreading awareness and creating that network, with the hope of eventually creating a formal coaching/mentoring program for diabetics. Some of the early interest has come from both diabetics interested in better personal management, and people in the medical field who are interested in learning how they might be able to better treat their patients who have diabetes.

“I’ve always had the vision and objective to change the way we do diabetes education, so that’s why I started Thumbs Up because I love science, I love researching, but I also want to have a resource that people can come to and get everything,” she shared. “So covering the basics of the education and applying it to their management.”

Gamble hopes that she can help diabetics, their parents, or anyone that is impacted by it learn more about how to better manage it. From her personal experiences she knows how difficult of a lifestyle it can be, and how the lack of resources can make it even more difficult to handle. She was first diagnosed with Type 1 diabetes on Christmas Eve when she was 8 years old, and has been living with it ever since. Now she is feeling better than she ever has thanks to the way she is managing her diabetes.

Especially given her experience as a Division I student athlete, there is a lot of insight she can provide. Playing a high-level sport in college can be especially difficult for a diabetic. The fact that they often have a lack of resources and knowledge of the best ways to manage the disease complicates things even more.

“I didn’t have any resources, or anyone to talk to, and that was really hard for me and something I want to change for other people,” she said. “Especially if they are going through university as a collegiate athlete because it’s a very demanding schedule and you really need that help.”

Now that she has been teaching and helping others, she has noticed a number of benefits, and not just for the people she’s been talking with.

“Teaching others has helped me as well,” she remarked. “I see them progressing and getting better, and I can already see it on the ice in myself, I feel like I’m way faster and just a much happier person in general, more positive. You definitely notice a difference in your mood.”

For now, Gamble is hoping that as many people as possible can find out about Thumbs Up Diabetes. She’s holding some informational seminars to eventually lead up to the 3 or 6 month coaching/mentoring program. She encourages anyone to reach out to her with hopes of helping as many people as possible. She has experienced the benefits of better diabetes management first hand, and is excited to share these methods that have really helped her with others.

“You don’t really realize how big of an impact diabetes has until you start reaching out to people and start talking about it,” she said. “So it’s a really hard barrier to cross. But once you cross and you realize how much of an impact better management has on your overall health and your mood and your relationships and everything it’s a pretty amazing experience, so I really hope I can help as many people as possible.”

Editor’s note: Gamble wanted to be sure to make the disclosure that she’s not a healthcare professional. That is something she’s trying to gear herself towards and it’s in her 5 year plan. For more information visit www.thumbsupdiabetes.com, visit Thumbs Up Diabetes on Facebook or Instagram or contact her via ThumbsUpDiabetes@gmail.com