Burrell forward Tyler Stewart moves the puck into the zone in the first. -- BRIAN MITCHELL

NEW KENSINGTON, Pa. — A community came together on Friday night at Pittsburgh Ice Arena to honor the memory of fallen New Kensington police officer Brian Shaw. PIHL teams Plum and Burrell took to the ice in an exhibition during the holiday break while local businesses and individuals alike lined the corridors of the dual-rink arena, working auction tables, selling tickets and a staple of all high school events, the 50-50. The family of Shaw was even in attendance.

Executing an event of this magnitude took that whole community and the organizers and players that drew from some unique personal situations. Burrell Hockey president David Schueler believed from the beginning that this was the route to go. 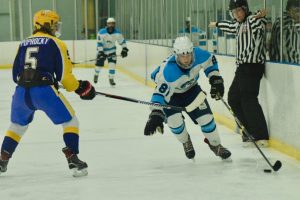 Dylan Zelonka moves in onside in the first. — BRIAN MITCHELL

“We always want to be upstanding citizens in the community.” Schueler said. “When an officer falls, its a good idea for us to stand up and do something. Myself, I have two family members who are officers, so it was easy for me to decide that we should do this.”

The second step was finding the right opponent. Luckily, the Plum Mustangs also call the rink just off of Rt. 56 home.

“Their president, Don, is a friend of ours, and a lot of the kids play together whether it be in amateur or other venues,” Schueler said. “It was easy for us to decide to ask them to help us out and do this event.”

Normal emotions were put aside on the ice, and the two teams took advantage of the rare occasion to just get to enjoy playing against one another in front of friends and family. The players that suited up for the exhibition enjoyed the competitive contest. Plum forward Domenic Borriello said that his decision to play was pretty easy.

“I thought that if me and my friends playing hockey could make other people help out a cause, it was a given that you would go out and play hockey,” Borriello said.

“It was interesting coming out and playing a game against a team you don’t normally play against in front of a lot of people,” Mustangs goaltender Sergio Benitez said. “Everyone out there was just having fun. Burrell was out there having a good time, smiling. We all knew it was about more than hockey. It was about remembering someone who gave everything he had for us.”

According to Schueler, the event raised around $5,000 for the Officer Brian Shaw Memorial Fund throughout the night.

HOCKEY WITH FRIENDS FOR A GOOD CAUSE 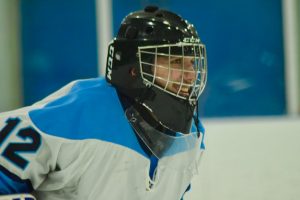 With the proximity of the two schools and both teams calling the Pittsburgh Ice Arena home, it was a simple task getting the players to agree to play each other. Burrell is situated in the PIHL D2, the co-op division, with their team including players from Penn Hills, Woodland Hills, Riverside and other schools that do not field varsity programs. Plum sits in Class Triple-A and is a year removed from being the state runner-up. The two teams never have the chance to play each other, and the evening created some memorable moments for the players.

“This was the best hockey atmosphere I’ve ever played in.” Plum’s Anthony Adamski said. “It was amazing, everyone was having fun. It was serious, but everyone was kidding around. We never played Burrell, everybody has a couple friends on Burrell and we all just had fun playing hockey. Playing against each other is amazing because you always talk back and forth about how ‘I’m better than you, I’m better than you’ and when you actually get on the ice it’s a whole different story.”

“Its something you look forward to because you see these kids in the locker room,” Benitez said. “They joke around and keep saying that they can get the puck past you, and until you actually get on the ice and play against them you don’t actually get to see it. But getting to play them in this atmosphere was definitely a special event we don’t get to do every day.” 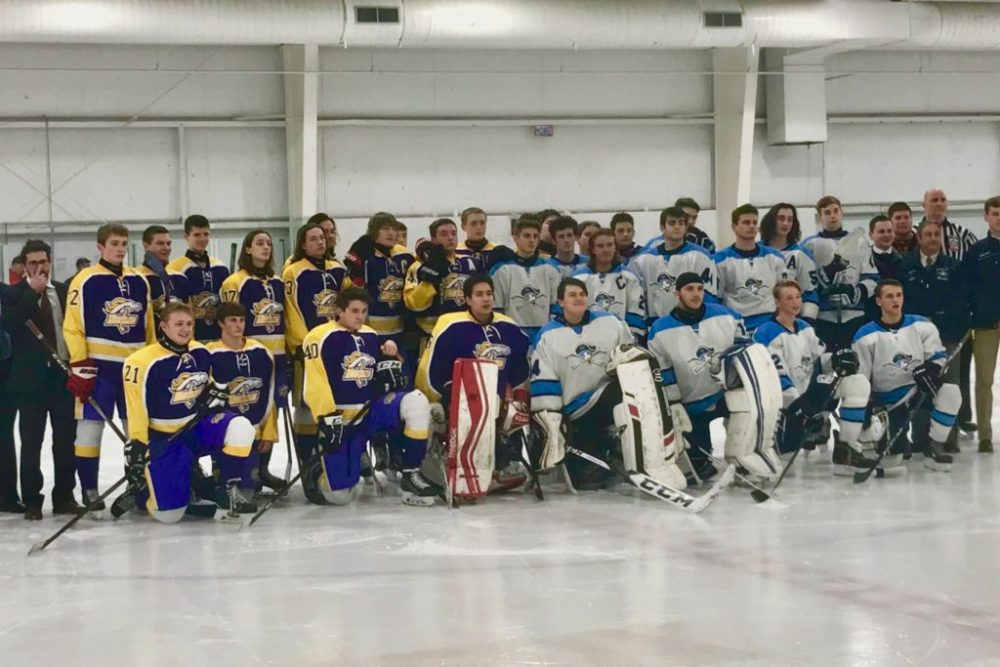