NEVILLE TWP. — A taste of the reloading of the defending Atlantic Hockey regular season champion Robert Morris Colonials was on display Saturday night at the 84 Lumber Arena as nine freshman took to the ice in their lone tune up for the upcoming season. And one particular performance stood out as newcomer Matthew Graham found the score sheet twice with a goal and an assist as well as senior forward Daniel Leavens in the Colonials 2-2 tie with the visiting Queen’s Gaels.

“Tonight was about getting a game under our belt and getting our freshman to play, and it was about seeing what we had,” Robert Moris head coach Derek Schooley said. “I’ve liked what I’ve seen in practice, so it was about getting an opportunity to see guys do things in a game and try to accomplish some things. Tonight, we got to see a lot of guys, we had three power play units so now we’re going to fit people into the units we want them and get a good week of practice before we play RIT.”

The two teams took some time to develop any kind of sustained pressure, however once the rust and or jitters wore off, the Colonials  maintained the better part of the early momentum, outshooting the Gaels by a eight to two advantage in the opening frame, leaving little work for starting Robert Morris net minder Dalton Izyk to do.

“I was pleased with our defense,” Schooley said. “We only gave up two shots in the first period so I would have liked [Izyk] to see a little bit more rubber, but I was pleased with how he played. We’re trying to learn about what we have and figure out who fits in the right situations.”

As good as the defense was early on, prime scoring chances were hard to come by early on for the Colonials for the most part until the 13:41 mark when Graham, stationed at the right side of the net, put a well placed pass from the left circle from captain Rob Mann past Gael netminder Jake Brennan to give Robert Morris the early advantage. Brennan would stay in the net throughout the game and subsequent overtime and shootout rounds, while Schooley opted to open the second stanza with junior Andrew Pikul between the pipes.

Pikul would actually have traffic and shots to contend with as Queen’s became more active in the Colonial end in the second period, amassing eight shots in a penalty marred second period that saw the Gaels climb back into a tie with forward Brock Edward’s goal at the 2:51 mark. Edwards sent a rising shot that clanked off the iron and behind Pikul from the right circle to tie the score. The goal appeared to give the Gales a momentum lift as the period went along as evidenced by several extended shifts and some forced Colonial turnovers, but Pikul and the defense kept the prime scoring areas sealed off for the rest of the second period as the teams headed to the dressing room knotted at one goal apiece. 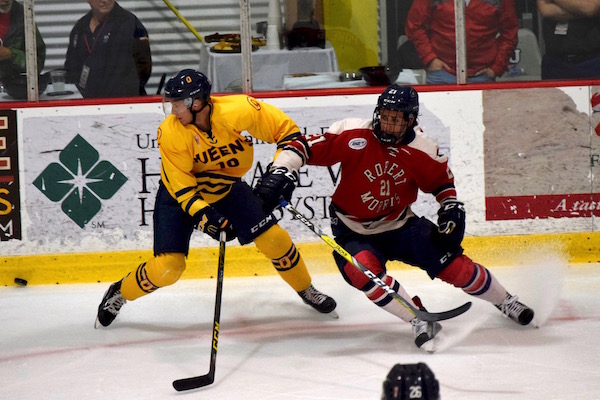 The Colonials came out to start the third frame, looking like a unit that was ready to put the flashes of spirited play early on, into a consistent pattern of behavior as they outshot the Gaels 12 to six and also improved a power play that had done very little in it’s first four attempts. Managing just four shots on their first four chances with the man advantage, the Colonials put seven pucks on the net in their two-third period opportunities. It was one of those advantages that saw Robert Morris take the lead as Leavens places a shot from the right circle past Brennan with traffic and a goalmouth scramble playing a factor to give the Colonials the lead as Graham was credited with the first assist and earned praise from Schooley who had much to be impressed with from his freshman class on this night.

“[Graham] plays really hard, he can skate well and he’s got a good stick around the net,” Schooley said regarding his freshman forward. “I was really impressed with Daniel Mantenuto. I thought Jake Coleman and Luke Lynch played very well. You go down the list and I’d say our freshman acclimated very well. I didn’t get as much ice time for some of them as I wanted to because we had five lines and eight defensemen, but it was good to get them ready to go for next weekend.”

The Gaels would not leave quietly though, and brought back their more spirited side in the second half of the third period, leading to a goal from Spencer Abraham at 11;27 when he beat freshman goaltender Francis Mayotte with a shot from just inside the blue line that appeared to deflect and change direction off a Colonials player to tie the game at two which it would remain through the remainder of the period and a five minute overtime that saw Brennan come up with some key saves to preserve the regulation tie.

Both teams decided to partake in a shootout following the five on five overtime, and Mayotte came up strong for the Colonials while at the other end, Alex Tonge was able to draw Brennan out of position while roofing the puck over the top of him which served as the only marker in the shootout round. Though the Colonials won the post game entertainment round, the official record of the game will reflect a tie.

The Colonials open their regular season in Rochester, N.Y. next Friday night against division rival RIT.